As this week sees the establishment of an Armani pop up store at Los Angeles International Airport's Tom Bradley International Terminal, plus the extension of actress Cate Blanchett's role as beauty ambassador for the brand's cosmetics line, Giorgio Armani is again sitting pretty.

As I discovered recently while interviewing him for the second time, Giorgio Armani himself is, while super-charming and friendly, a complicated and in many ways, like all those with a touch of genius, a contradictory man. In the ever changing world of fashion, he's remained a constant, despite premature predictions of his demise. Born in Piacenza, Italy, July 11th, 1934, he's had more influence on fashion than anyone since Christian Dior launched his "New Look," in post-war France. Today Armani heads an empire estimated by Forbes to be worth USD$8.6 billion but despite the fashion industry's reputation for frivolity, he built his career with hard work.

When I spoke with Mr Armani in Shanghai he said, "I always knew when something was wrong, like a fork

out of place at the dinner table and then later, I learned how to make it right."

He also learned how to make it popular.

However during his youth, Armani pursued a different career. He studied to be a doctor, but soon gave up medicine, partly because he could not stand the sight of blood. His knowledge of anatomy however clearly informs his knowledge of how the body needs to move to experience comfort and I believe that this is why his clothing - quite literally - fits like a glove. There are no other more comfortable nor stylish and long-wearing clothes you could find. Fact.

In 1957, after completing his military service, he found work at Italy's leading department store, La Rinascente, first, dressing windows and later as a buyer.

In 1964, he joined Nino Cerrutti, which at the time was one of Italy's largest textile manufacturers, which also produced clothing lines.

Working with fine textiles and learning the techniques of the business was key to Armani's future success. In 1970, he set up a freelance design studio, with clients including manufacturers such as Boulevard, Montedoro, Sicons and Gibo. In 1974, he presented the first Giorgio Armani menswear collection.

"When I began to design, men all dressed in the same way," Armani muses. "Everyone wore the same uniform. Traditional clothing depressed me...I wanted to personalise the jacket - to make it more closely attuned to its wearer."

How would one achieve this? For Armani, the secret was to remove the jacket lining and change the structure, rendering the jacket more like a second skin. The unlined jacket, Armani's most famous innovation, was born.

"Taste," he says, "is about accentuating your best features and disguising what you are not so happy with."

By 1975, Armani had put enough money aside to launch, in collaboration with his business partner, Sergio Galeotti, his first women's line. The timing was perfect. Women were entering the workforce at the executive level and looking for a female version of the male power suit. Armani's signature androgynous designs for women made trouser suits chic, both in and out of the boardroom. (below: 1990, Golden Globes, Best Actress, Julia Roberts, wearing an all-Armani ensemble).

Next he developed the "Armani Look" to include evening dresses, examples of which are on display every year at the Academy Awards ceremony where many of the best dressed stars are famous for choosing Armani for the red carpet (including Jodie Foster, Julia Roberts and Samuel L. Jackson.) (below: Stick with the Winners: Jodie Foster picks up one of the two Oscars she's won for Best Actress, in head to toe Armani, in 1992, age 28).

However the Armani style is not about "creating a trend for the sake of creating a trend," nor is it about looking at whatever the competition are doing. "I focus on what I do," says Armani, "not what my competitors do. I am a perfectionist - creative, driven, sincere and curious." (below: Iconic. Richard Gere and Lauren Hutton burning up the lens in "American Gigolo," 1980, with Gere in head to toe Armani menswear).

Following the 1980 success of the film, "American Gigolo," featuring an Armani-clad Richard Gere, (above), the designer launched Emporio Armani (a less expensive but still chic label) which brought him closer to the top. Two years later, he became the first designer to appear on the cover of Time magazine since Dior in the late 1940s. In short, Armani was established as a fashion icon and a synonym for glamour.

This is not to imply the man then rested on his laurels. In 1989, he fused fashion with cuisine with the Emporio Armani Express restaurant in London and two years later produced the accessible line "A/X Armani Exchange," in New York's SoHo.

His financial ventures extended further to include Simint SpA, and Guardi SpA.

The same year, he established a venture with the Zegna Group for production and distribution of the Armani Collezioni men's line.

Which leads us to China. The Three on the Bund store in Shanghai opened in 2004, including Giorgio Armani Boutique, Emporio Armani, Emporio Armani Caffe, Armani Fiori and Armani Dolce, earning, in the first six months of operation, a whopping RMB 89, 401, 252.

In 2006, Shanghai hosted the final stop of the "Giorgio Armani Retrospective," being an exhibition by designer Robert Wilson with music by Michael Galasso (of "In the Mood for Love" fame), marking Armani's 30th anniversary of being in the fashion world.

Armani tells me during our interview that he feels that "China is an extraordinarily magical place, which for us in the West, holds a mythical allure. It seems my destiny to have ended my Guggenheim-curated Armani retrospective exhibition here. It has such a history, Shanghai, and you hear so much about it these days, but the reality is still a surprise. I cannot think of a more appropriate city to have ended the Asian tour of my retrospective, than Shanghai."

Now in 2018, the Armani brand operates a total of forty-nine stores in Shanghai alone, choosing, along with Patek Phillipe, Dolce and Gabbana and several other luxury labels, to move away from The Bund area and instead focus on higher traffic areas for the luxury consumer, such as the newer airport terminal at Hongqiao and within the smart Parkson centres of the city's inner shopping precincts.

There is possibly no more appropriate locale to present his newest collection. This season we're seeing bespoke Armani eyewear, detailed embroidery on jackets, flowing, easy garments and a youthful zest mixed with classic lines. (below: New Directions: A fresh look from the Armani Resort Collection, 2018).

It's an elegance that clearly embodies the "less is more" axiom. He says that a designer's job "is not to disguise people, but to give them the opportunity to look their best and express themselves."

"My clothes are not over-designed," Armani explains, "and they do not overwhelm."

Armani's clothes may not overwhelm but his fans certainly show a sense of overwhelm in his presence but his down to earth nature puts everyone at ease (including me!)

Armani is enchanted by our interview location in China; he is also quick with sincere praise for the local fashionistas. 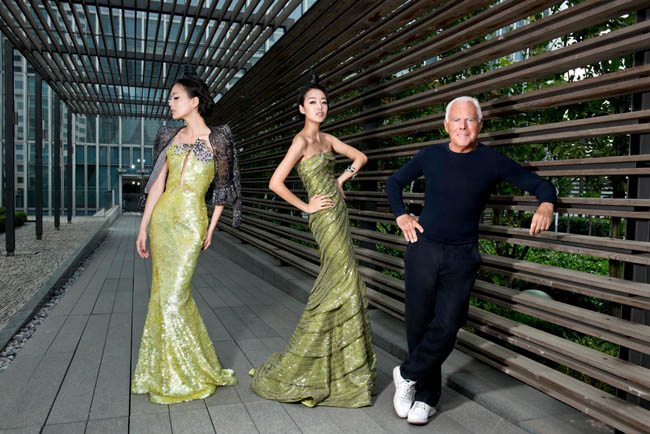 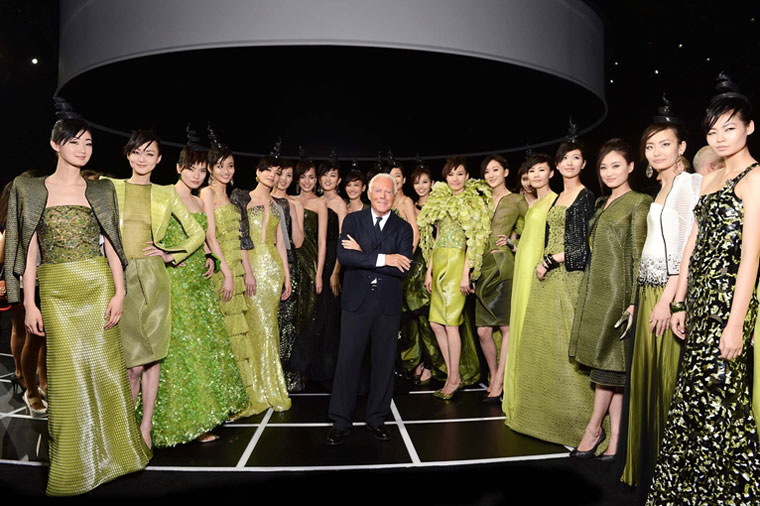 (above: A bevy of Chinese models welcome Armani to Beijing back in 2012. Armani is set to re-visit China again in 2019). "Chinese women," he reflects, "are incredible. Many are tall, elegant and slim. Chinese women are really beautiful and it fills me with a desire to clothe them."

I ask him if his passion for Chinese women and Asian culture in general extends to the purchase of copies, noting that there's a "Georgie Ormoni" store in Shanghai's downtown area!

"Back when I met with the (then) deputy mayor," says Armani, "Mr Han Zheng, we discussed the worrying issue of fakes and he explained how seriously they take the problem and measures they are putting in place to combat it. Ultimately the person who suffers is the consumer."

At the same time, Armani concedes that it is more difficult for designers now than when he first started out. "Now, designers are at the mercy of big business groups who ultimately make the decisions. My advice to young designers would be to stay true to your own individuality and fashion philosophy," he adds.

"I owe a good part of my success to the fact that I have stuck to my 'fashion philosophy,' which is: 'Evolution NOT Revolution," he advises. "To be successful, one has to have clear vision. There is no point following transient trends. If you get caught up in them, it is easy to lose your public, your clients and your recognisable style. I have a strong personal aesthetic and pursue it in spite of what anyone says. One of my biggest challenges is to come up with new ideas, while remaining true to my identity and vision of style."

Even at his current age of 84 (on July 11th, meaning he is a caring Cancerian), Armani's vision is focused on the future. "I have no immediate intention of selling my company," he tells me, "I do, however, realise I will not be around forever and that is why I am grooming my organisation with a small, competent group of managers who can carry on when I'm no longer around, but, I rule out a future marriage with a fellow fashion firm as it would lead to rivalry. The ideal situation would be an investor from other sectors who wants to invest but allows the brand to maintain its evolving identity. It would have to be a purchaser that understands my philosophy. I have no intention of doing anything rash," he adds, "Time will tell."

For those whom wonder where Mr Armani can be found when he's on vacation, well, you can spot him in one of the places where he owns houses such as Broni, Saint Tropez, Forte dei Marmi and Pantelleria. That said, he never goes on holiday without his computer and phone close at hand because, as all creatives will understand, he's always working (even on vacation).

Christina Morrison: Fash in the Time of Covid